LAKSHIMI AND THE EIGHT ATTRIBUTES OF WEALTH:    by Barry Rosen

With the next 3 days connected to Lakshmi during the Nine Days of Mother Divine, it is time to focus on the broader aspects of wealth and not just physical and material money.

We usually think of wealth as material comfort but Vedic texts remind us that it is much more. Wealth should include health, success, courage, friendliness, skills and talents, dignity and memory of one’s Divine nature.   (this is part of a talk present at the British Association of Vedic Astrologers in London in April 2015)

Many of us are so wealthy, and yet we do even realize it?    We have been trained to measure wealth in terms of our bank accounts or our investment portfolios rather than see it from a broader perspective.   In the traditional Vedic literature the secondary manifestations are known as the Ashta Lakshmi or the eight powers of Lakshmi.

My spiritual teacher, Sri Sri Ravi Shankar elaborated on these below and gave a discourse on the 8 aspects of Lakshmi in his book, Punarnava: New Again . In studying the traditional depictions of Lakshmi in sacred art, I realized that he had a rather innovative take on these forms. So I have intergrated the traditional names and art forms with his concepts  and I will focus on summarizing his insights below. I have added a few thoughts about how these show up in Vedic astrology but that would be a much longer article.    I am working on developing an index to quantify these qualities for evaluating charts.

Depicted as six-armed, in red garments and carrying a discus, a conch, Amrita kumbha or a pitcher containing the elixir of life, a bow-arrow and a lotus in each arm with gold coins falling from it.

The first type of wealth is what we commonly understand as wealth in physical money and property.   Many of you may know people who inherit money but who are miserable and cannot succeed at anything they do.  Many times family members get into ugly fights around inherited money that is acquired without any effort. They feel guilty or undeserving and they may squander it.  You probably also know people who have a lot of money but are constantly battling health issues.

While there are numerous yogas for wealth, I find that 2nd and 8th houses have to be strong and well-fortified by benefics in their own signs or exalted or in friends signs for this to be substantial.

Here Lakshmi is depicted as having eight arms in green garments, carrying two lotuses and a paddy crop, sugarcane bananas and having two hands in abhaya mudra and varada mudra.

While often translated as agriculture, I think that this aspect of wealth may be associated with food and health.

It is often noted that people spend so much energy acquiring physical wealth and then spend half of it to gain back their health.  You probably know some people who have lot of money, but they cannot eat well, or they don’t have the time to eat.  They may have serious health problems or they cannot eat many foods due to ulcers or diabetes or liver problems.   You may also know people that have beautiful homes but they cannot enjoy them because of their health problems or problems sleeping.  The tragic death of Michael Jackson is a recent example as he had to be put on a very potent drug used in surgery just to get any sleep at all.  Of what use is all that wealth?  Physical wealth without health to enjoy it is worthless.

I work a lot with the farm community and they are such a wealthy bunch because no matter what is happening in the stock market, they have their land, their livestock and their crops and they feel very abundant.  They have affluence to feed the whole town in times of trouble.  This is the second type of wealth.

Taurus, the 2nd natural sign of the zodiac is the obvious embodiment of these qualities and when strong and when the 2nd house is well aspected by benefics and especially if Venus is in her own sign in the 2nd, house, these qualities will shine.  A strong moon with moon in Taurus or in Cancer or well-placed and a strong Saturn connected to agriculture and connected to Venus in a chart will increase these qualities.

Here Lakshmi is depicted as having eight-arms in red garments and carries a chakra, sword, shield, lotus and pasha and is in abhaya mudra and varada mudra.

The third type of wealth is success or the ability to be victorious.  Many of you know wealthy families where the children party all the time and anything they try to do does not work.  Despite having physical cash, their lives are incredibly frustrating in their inability to succeed. Often people lacking Vijaya Lakshmi will have a negative attitude and give excuses like “that can’t be done”.

At the same time you probably know people that just get things done and overcome obstacles and go into uncharted territory and believe in themselves, They have the third type of wealth, Vijaya Lakshmi  – the ability  to be victorious and successful in any action.

Here Lakshmi is depicted with eight arms, in red garments and carries chakra, shankh, bow, arrow, a bundle of palm leaf scriptures and is in a typical mudra.

Tied to success is courage, “nothing ventured, nothing gained,” is an old adage.

Courage is also tied to the “fun” aspect of Lakshmi.  Someone may have a lot of money but if they do not have courage there is no fun in life.  There is a need to see life as a game and be adventurous and not being afraid of making mistakes.

You also see people who have incredible courage and they will do the most ambitious things and sometimes fall on their faces but always get up with a sense of fun and new adventure.

A strong Venus is necessary to have fun and a strong Mars aspected by Jupiter or in its own signs of Aries or exalted in Capricorn and connected to Venus bring out these qualities most strongly in a chart.  Having the D-3 lord very strong and Mars well placed in D-3 will be important and having a strong 3rd house lord well-placed will be important.

Aadi-Lakshmi or “Primeval Lakshmi” a.k.a. Maha-Lakshmi or “The Great Lakshmi,” as the name suggests, is a primeval form of Goddess Lakshmi, regarded as the daughter of sage Bhrigu and wife of Lord Vishnu or Narayana. Aadi-Lakshmi is often depicted as the consort of Narayana living with him at his home in Vaikuntha, or sometimes seen as sitting in his lap, and her serving of Lord Narayana is symbolic of her serving the entire universe.

The fifth type of wealth is friendliness and the ability to socialize and have a caring and compassionate sense of belongingness.   Are you the type of person that is at home talking with all kinds of people at a wedding: the kids, the teenagers, the adults and the grandmothers?   If you cannot put yourself into every situation, and adjust yourself then you are not fully living in connection with others.

So if you have a lot of inherited money but you do not accept people or feel awkward and alienated from society, how wealthy are you?  At the other end of society there are those people who are connected to all levels of society and use their money to help society and contribute to charities and organize fund raisers.  These people are very wealthy because they give. There are also a lot of people who have no bank accounts but give everything they have to help others. They are very wealthy.  I learned this from my Dad.  We did not have much but he was always giving his poor customers credit to buy groceries when they were short or sending our out-grown clothes to help other families.

Here a strong Venus or Jupiter in the 1st or 7th houses in a friends sign or own sign will bring out these qualities most.

This powerful quality represents good luck and abundance and dignity.  In the sacred power of meditation, all the forces of nature come to bestow good luck and prosperity symbolized by the elephants shower her with oblations and good fortune.

There is a power in dignity and presence that some are born with and we used to call them “blue bloods.”  They radiate abundance in their presence and royalty.  Many of these people are highly philanthropic and are often quite humble. In the eyes of the Divine, those, who serve creation, are true kings and queens.  Their royal nature is a great wealth and they bask those around them.  .

(VII) Wealth as Memory of the Source and Knowledge: Aishwarya or Vidya Laksmi

Here Lakshmi is depicted with four arms, in white garments and carrying two lotuses and in traditional mudras.

The eighth type of wealth is the memory of your source which is the highest quality of learning and wisdom.

You probably know people who think their book collection is their source of wealth and their love of knowledge and wisdom is more important than the balance in their bank accounts.

Many of you probably realize that suffering and karma is there to always point us back to God, to our source. You probably know people with very strong 11th house and lots of money but their life seems empty as they wander from one drunken party to the next.  In contrast, when you go to India you meet very religious families who are very devoted and who know they are here on the planet to give and to find God.

As my spiritual teacher, Sri Ravi Shankar puts it: “The moment you become aware of your Source, and your infinite past, your whole life changes – like somebody suddenly becoming aware of how wealthy he (or she) is.  It causes a shift in the awareness.  Suddenly, you become aware.  “Oh!  I have several billion dollars in my bank account!”  Your style of walking will change immediately!  This is the awareness of the Source.”

Obviously having strong 5th and 9th houses and their lords well-placed and aspected is important. A strong 12th house with the 12th lord in his own sign or exalted will be most supportive.  Strong 1, 5 and 9th houses in D-20 are key and a well-placed Ketu particularly in Pisces or Scorpio can be a big plus.

Depicted as six-armed and carries two kalashas or water pitchers and a sword, shield and a child on her lap and the child is holding a lotus.

The wealth of children and the continuation of the race have always be one of the greatest forms of wealth but how often do children in Western cultures rebel against their parents.

One of the biggest blocks to enlightenment is attachment to children as they so often disappoint and turn against their parents. Having children who honor their parents and bring grandchildren and continue the lineage is considered a great wealth.

Strong 5th   and 9th   houses and their lords well placed and benefics aspecting or in the 5th and 5th lord well places and strong D-7 chart are all supportive for these qualities. 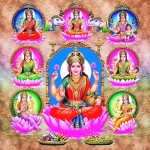