Whereas western culture delights in January New Year predictions, the Vedic New Year calendar is often run for the new Moon in March after the spring solstice for the capital city of a country. This year the Vedic New Year does not  begin until March 17th and on that day astrologers cast a chart for the capital city of their country  and predict the New Year accordingly.  There are some schools of thought that would use the 18th because it happens after sunrise but the chart is very similar except for the Moon’s nakshatra and the Sun’s nakshatra.  My teachers are using the chart for the 18th.

In the Vedic calendar there is a deity or god that governs each year and they rotate each year for 60 years and they are connected to the Jupiter and Saturn returns which means the last time that Jupiter was in  Libra and Saturn in Sagittarius. Hence we are going to have influence like we had in 1958-9.

This  year is the Year of Vilamba. March 17, 2018, 9:12 am, Washington, DC or run it for your capital at the new moon after the spring equinox. Here is what the vedic texts say if you were born in this year which last was seen between March 1958-1959:

“The native whose birth occurs in the ‘Samvatsara’ of ‘Vilamba’ is deceitful, extremely avaricious or greedy, lazy, phlegmatic (that is, his predominant humour is Phlegm), weak, fatalist and has the habit of speaking without purpose, serviceable, defeated by his wife, contented, keeps his thoughts secret, and is of restless nature.”  (Note: These Vedic texts never seem kind in these descriptions.)

In world history, the Spanish-America war began in April 1898 and continued into the end of the year.  This was also during the 3rd year of the US Rahu period.   Russia prevented Finland from becoming autonomous in Feb. 1899 and one has think of Ukraine.

The satellite Sputnik 2 (launched 3 November 1957) disintegrates during reentry from orbit in April 1958.  Castro’s invasion of Havana begins that year. In Lebanon, 5,000 United States Marines land in the capital Beirut in order to protect the pro-Western government there. In 1959, at  Cape Canaveral, Florida, the first successful test firing of a Titan intercontinental ballistic missile is accomplished. The Tibetan uprising erupts in Lhasa when Chinese officials attempt to arrest the Dalai Lama.  Alaska and Hawaii are granted statehood also during the  Year of Vilamba.

If any theme emerges, it seems to be that of war and blocking of freedom for countries wanting to become independent.   Obvious Korea has to be on our mind this year with Saturn in Sagittarius promoting fear from opponents and we think that that the Ukrainian situation could escalate this year but we will have to look at their chart in more detail. 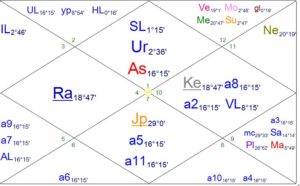 Chart of the Year of Vilamba for the United States.

Note the ruler of the day is the Sun because the new moon occurs after Sunrise  and thus Sun in the 12th becomes the major influence for the year.  The lord of the chart is Mars conjunct Saturn within 9 degrees in the war-like sign of Sagittarius and the 9th house dealing with foreign countries.  Jupiter is retrograde and sandhi at the end of the sign in Libra.  Four planets are in the 12th house of Pisces including an exalted Venus with Rahu in the 4th creating an unsettled feeling of peace and contentment on the year.  The ruler of the Year, the Sun is placed in the 12th house which is the most difficult placement for the Sun suggesting that the world will not see the US in a positive light or it will become less important.

We will analyze this chart in more detail as we find more time going into March.   We should note that in the US chart, the Mars/Saturn conjunction in early April is in the US 1st house aspecting  the US house of enemies and this would greatly increase fear and war tensions for that time window.   Given the parallels with the Spanish-American War of 1898 in that Year of Vilamba, one has to think a war by spring seems rather ominous but is something that we do not want to put too much attention on.  Will the Mars/Saturn conjunction and all the planets in the 12th house create a lot of frustration regarding foreign affairs?  Seems that way but maybe the exalted Venus in the 12th can rescue the situation and prevent major problems.

Other country charts will have different rising signs and put the planets in different house. For North Korea and Japan, Jupiter goes into the 1st house and creates a much better annual chart for them.  We will discuss other countries in additional articles.

Want to enjoy more articles like this.  Get our 2018 Vedic Astrological Almanac and Transit Guide.

It has been wonderful serving you these past 18 months with my free blog.  If you would like to show your gratitude, please consider my 2018 Vedic Forecast book below.  Wishing you a wonderful holiday season.

We are completing our 2018 Vedic Forecast and Transit book and will   have it ready for the New Year.   Over 110 pages of details on 2018.  This product is not a Panchanga!  It is a reflection and elaboration of our daily columns looking out to 2018.