In Part 1, we explored the how the  9th house helps us to find meaning in our life and be touched by the Divine on some level to help us  make sense and find relief from suffering. For the fixed house rising signs, Taurus, Leo, Scorpio and Capricorn, this energy can get afflicted and lead to religious fundamentalism and spiritual bypassing.

In his seminal book, Spiritual Bypassing by Robert Masters discusses how many of us turn to religious or spiritual beliefs to avoid dealing with painful feelings, unresolved wounds, and developmental needs.   Whether this happens with Christian dogmatism or fundamentalism or rigid belief structure it pervades our world and is causing huge problems with fanaticism and even terrorism.   People easily turn to religion and spiritual to duck uncomfortable feelings in favor of more seemingly enlightened activity. When split off from fundamental psychological needs, such actions often do much more harm than good.  This has seamlessly invaded our culture and New Age spirituality,  that it easily goes unnoticed as spiritual movements and cults provide comfort from childhood wounds.

Spiritual bypassing can take the form of emotional numbing and repression, blind or overly tolerant compassion, ignoring one’s physical and material existence in favor of spirituality and the delusions around it. In the end, we turn away from our pain, numbing ourselves and assuming that spirituality and religion will make us better.

Spiritual bypassing is so common in our world and it is an affliction, I have often wondered how it shows up in astrology.  For fixed signs, Taurus, Leo, Scorpio and Aquarius, the 9th house of religion, belief, spirituality and higher wisdom can be badhaka particularly if it is connected to a malefic planetary influence like Saturn, Mars, Rahu or Ketu but this can happen by aspect, association, house placement or even nakshatras placement and hence is very common.

Badhaka is a block or obstruction and represents planets that block your personal growth.  It is like Rahu with a shadow influence that runs your life  but it hard to understand or unblock because it is invisible.  They can be good planets but they have hidden shadow influences that are difficult to understand and may run your unconscious life.  In a sense they become a very core hidden  area that we cannot get a handle on.   (Parashara does not discuss them but they are in other texts like the Prashna Marga and the Jataka Parijat in Chapter 48.)

Thus when the 9th house is Badhaka it can lead to spiritual bypassing or religious fanaticism which becomes unconscious in our life and while blinds us to the truth of our pain.  If Rahu is involved, we may get obsessed by religion and spirituality and use it as bypass to not dealing with our deeper issues. Usually the chart needs a weak or afflicted moon or ascendant lord which would create the emotional pain need to lead to religious escape. This is so common that we often do not see it.

If you are a fixed sign (Taurus, Leo, Scorpio or Aquarius), the 9th house ruler creates a block and this often manifests as hidden problems with Gurus, your father, spirituality or religion.  Because the 9th house is related to fixed signs, there can be a strong obsession and stuckness about religious or spiritual values.   Given that probably 1/3 of the rising signs are fixed and many have 9th house badhaka, we can see how this can be a problem and an unnoticed problem in the world. This block may manifest in not being able to take the right advice from one’s father or Guru or using spiritual and religion to escape from our emotional wounds and pain by turning to religion.

The combination of signs, planets and aspects and influences always create a myriad of coloration.  In my chart (below), Scorpio rising with 9th lord the moon being the bhadaka planet in the 1st house and aspected by Mars, it has lead to a fascinating combination. It is also connected to Mercury in Jyestha nakshatra which is the 22nd Drekkana lord.   I have always had difficulty receiving touch like massage or sexual pleasure.  The debilitated moon has created emotional trauma that has led me to seek solace in religion and spirituality.  It has created a spiritual bypass situation where I have run to Gurus and meditation rather than heal the emotional scars of my mom not being present or touching me or holding me enough when I was young.  I am only now getting in touch with the need to heal these issues to become more whole. 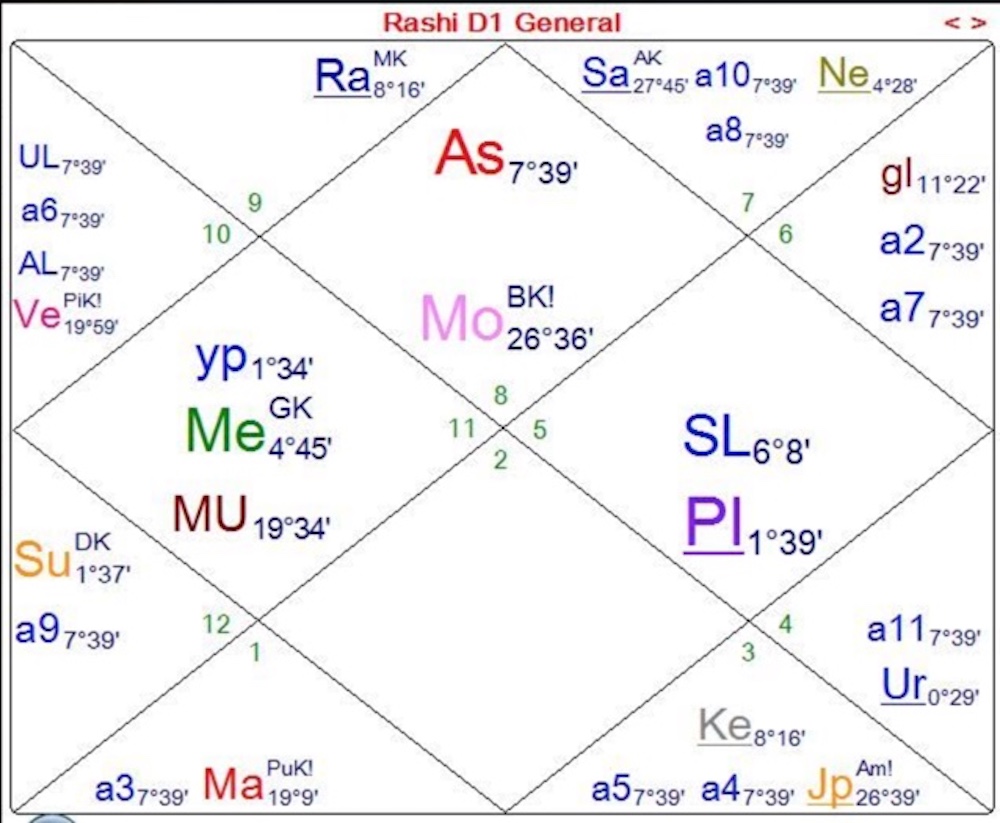 With Cancer rising and the moon being the bhadaka planet, the native may be more interested in how he looks in society and become too self-important.  There may be too much generosity or sensitivity that may block progress and ability to function. This can lead to one using spiritual bypassing and religion as a drug to deal with emotional dysfunction or dryness.  With Cancer rising owing to the 9th and being a badhaka house, the individual struggles toward higher wisdom but if the moon is weak or afflicted and connected to a badhaka planet, there may be blocks to true spiritual growth.

For Taurus rising, Saturn and Capricorn own the 9th house and is badhaka. Even though Saturn is a raj-yoga karaka planet, Taurus usually has a  tough relationship with one ’s father’s and Gurus.   Capricorn by nature is more rule-orientated so Taurus may easily turn to dogmatic religions and immerse themselves in their church or temple and adopt a more orthodox approach to religion as a way of bypassing their pain.  This, of course, would be dependent on other key elements in the chart such as having a weak moon in the 6th, 8th and 12th or connected to malefics such as Rahu or Saturn or Mars or being in weak signs like Capricorn, Aquarius or Scorpio.

For Leo rising, Mars owns the 9th  house and connects to Aries.  Mars a malefic planet becomes the best planet Mars and is raja yoga karaka here. But he is also a badhaka and therefore there is underlying blockages. Any planet placed in the 9th will suffer some form of obstruction and may cause spiritual bypassing in the form of more fierce control and fiery leadership to further one’s spiritual values and hidden agenda. They may also have a   hidden agenda and unseen problems with religious authority and leadership and if Rahu is involved this may lead to rebellion and obsession.

For Aquarius rising, Venus owns the 9th house and becomes the badhaka planet. This placement can give rise to spiritually advanced souls with a strong humanitarian bent but because Aquarius is co-owned by Rahu, there can be a movement toward religious fanaticism or getting stuck or radical obsession to create a better world through one’s religion.

We cannot ignore Sagittarius, the natural 9th house of the zodiac. If a Badhaka planet is connected to it like Mars, the Moon, Saturn or Venus for the fixed signs, it may trigger religious fanaticism.  In the case of Billy Graham the famous Southern Baptist television evangelist, this is because of a connection with the badhaka 7th house planet, Mercury connected to his 9th house and Rahu.

Take the chart of Billy Graham (Nov. 7, 1918, 15:30 pm, Charlotte, NC).  He is Pisces Rising with Rahu debilitated in the 9th house with a the badhaka planet Mercury, going into the 9th house and conjunct Rahu.   Mars is afflicting his moon tightly creating the emotional affliction that may lead one to turn to religion.  Note that the age of 14th, Billy Graham’s father forced him to drink beer until he got sick fostering a life-long aversion to alcohol and drugs and certainly creating a difficult and emotional relationship with the father as suggested by Rahu in the 9th and the 9th lord in the 10th afflicting the moon.  While creating a stellar career and world status, you can see how the religious fanaticism is fostered with the retrograde Atmakakara Jupiter and ascendant lord also impacted by the Badhaka planet Mercury being the depositor for Jupiter and the Badhaka planet being placed in the 9th house with Rahu. 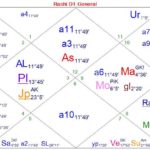 When time permits, I will work up numerous other examples for a larger case study but it is a fascinating topic that needs to be explored.

All glory to my Jyotish gurus and to Komilla Sutton and Sanjay Rath who have given me the wisdom to understand these deep and hidden aspects of our lives.

Want to learn more about the Secrets of the Houses?   Take our 19 lesson course now available for download. On sale for 295.00.  Available at:

SECRETS OF THE HOUSES: PREDICTIVE TECHNIQUES, REMEDIES AND PSYCHOLOGICAL DEPTH