We are down to 5 retrogrades now with Mercury direct and then down to 4 with Mars direct on August 26th and then Saturn goes direct on Sept. 6th and we will be down to the outer planet only.

I frequently get questions about retrograde planets and they are often misunderstood because everyone always thinks of Mercury retrograde as being universally bad and that is not true for everyone.  It is thought if the retrograde planet is the owner of the chart, then it becomes stronger for the person but makes them more “reflective” psychologically. The houses, nakshatras and signs of the retrograde position in the natal chart are key and then in transit, if it is in the natal chart, it gets triggered in transit.
Retrograde planets are brighter and closer to the earth. So, they are focused on the past and the disappointments and abuses they suffered. This makes them look within and they become confused about moving forward but they don’t want to go backwards so this creates a situation of deep introspection. So, this creates a planetary influence of thinking rather than doing that happens according to the planet that is retrograde. For example, if Saturn is retrograde, one may a lot about spirituality but only in the reflective sense rather than actually practicing it.

Some general things you can say about retrogrades:
• The planet’s energy may reverse, pulling the energy back into the sign that it is retrograding into.
• There are more medical problems from retrograde planets in Ayurveda.
• The flow of the planet’s normal energy is disrupted and the house that the planet occupies will be affected and not work fully.
• The houses that the planets own will also be weaker.
• The significations that the planet or house produce become a source of confusion and is surrounded by stress and difficulty but because the retrograde planet is closer to Earth, it shines brighter and illuminates the internal, psychological aspect of how the quality of the signification feels, hence, its force of intelligence becomes very developed because it is ‘reflecting.’

• Note: The Sun and Moon never retrograde.
• Retrograde makes the planet stronger which does not always mean better.
• Retrograde malefics like Saturn and Mars may have more strength to cause more harm unless they are the chart lord and then they are better for the person, in which case they may make the person inwardly reflect to find ones’ true source of strength.
• Planets that are exalted and retrograde may become passive and thus are conducive to material or spiritual achievements in life if they are in the 1st, 4th, 7th or 10th houses.
• Dasha periods of debilitated or exalted retrograde planets deliver results during their dasha periods. This is good for spiritual advancement.
• Some special rules apply to combust retrograde planets as they can accelerate spiritual growth during their dasha periods.
• Note about the outer planets: Pluto, Neptune and Uranus are in retrograde motion approximately 5 months every year.
• Parashara indicates that a retrograde motion will reverse the effect of an exalted or debilitated planet but that is controversial.
• Exalted Retrograde Saturn acts debilitated — not totally true. The reality is that an exalted Saturn will still externally produce good results such as good technical competence, making one clever, focused, well-organized, faithful, practical and good in foreign connections but internally, a person may have the debilitated qualities of Saturn including some depression, self-deprecation, fear and feeling frustrated even if outwardly things go well. There becomes a schism between the outer and inner realities.

Mars: Less inclined to act. Procrastinators. Avoids conflict. Doesn’t compete. Avoids battles. Avoids confrontation. May be hotheaded or excessively competitive with a chip on their shoulder.
Mercury: More intuitive people and reverses Mercury’s normal logical mind. Non-linear thinkers. Doesn’t feel heard or understood. Hesitates to speak his or her mind. Doesn’t have clarity. Not sure how to express ideas or oneself. May stutter.
Jupiter: Creates bargain hunters and people who help the disadvantaged and weak. Searches for the ‘inner guide or teacher.’
Venus: Reverse sexual norms and they could become celibate, frigidity in women or some tendency toward gay/bi sexual or being at odds with traditional marriage and partnering.
Saturn: Renunciate, monastic, self-isolating; alone; rejects others so they will not be rejected; grim, depressed. Fear of time, death, decay, loss, separation, disease, transitions and infirmity.
Uranus: An abrupt, forceful or extreme change that is unconventional
Neptune: Inner fears about making dreams a reality, keeps ideas hidden, practices escapism, may be deceptive and wear a mask to fit in.
Pluto: Inner fears about suppression and authority, phobias, manipulation, betrayal, the realms of the taboo, sexuality, death, will be in denial, strives for security, and wants to be in control, scared of transformation and change.
As always there are many factors that govern judging every planet including how many benefic and malefic aspects associations there are to the retrograde planet, placement in the D-9 chart, nakshatra influences, houses involved, and houses owned but these are some general guidelines.

Special thanks to Bill Levacy, James Braha, Sanjay Rath and Sam Geppi for some of their insights on this material.

Need help with your chart?  Sign up for a reading under the request tab at www.appliedvedicastrology.com

FREE CLASS ON THE SECRETS OF VEDIC RELATIONSHIPS ANALYSIS:

We are starting to take pre-orders for our new book:

LOOKING UP THE MAGICIAN’S SLEEVE:  USING ASTROLOGY TO SEE YOUR BLIND SPOTS AND HIDDEN UNCONSCIOUS PATTERNS:

Spiritual, Emotional and Psychological Wisdom to Guide You Though the Realms of Fear and Illusion. 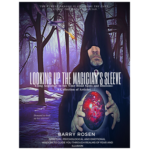 The deepest purpose of Vedic Astrology should allow us to see the Maya or illusion that runs through our mind and blocks us from seeing our own Divinity. Astrology should reveal our hidden patterns and not just affirm what we know about our self already. It is our hidden patterns and blind spots which get us into the most trouble and cause us the most suffering. It takes courage to look at them, bring them into the light and transforms them but that is why we are on the planet. It is much like Bill Murray in Ground Hog Day (1993). How many times do we have to repeat our lives and relive our pain or do we realize our flaws and actively work on them and transform ourselves into a more conscious and active and loving and compassionate person. In this brilliant collection of essays divided into 4 sections, Psychological and Emotional and Spiritual Dimensions of Vedic Astrology, Secrets of the Houses, Spiritual Astrology and Advanced Techniques in Vedic Astrology, Barry reveals material beyond the ordinary in unveiling our True Self beyond the illusion.  Pre-order special is 15.95.  Book is available by Sept. 19th at the latest. E-book version.