RAHU AND THE IMMIGRATION CRISIS: THE TWO SIDES OF THE SHADOW

The US went into a Rahu period in 2015 that lasts until Nov 2033.  Many of the European countries are in a Rahu period also and clearly the nature of greed, corruption and technological advance in the world suggest the Age of Rahu is very powerful and dominating.

Rahu governs immigrants and is very connected to criminals and politicians  and during the last US Rahu period 1895-1913, we also had huge waves of people coming to the United States from Europe and of course everyone has an immigration story in the US unless you are a Native American.

The quandary of immigration is balancing compassion and humanity with safety. It is no easy task. Rahu by nature creates excessive fear and paranoia and the Saturn aspect to it through Jan. 2020 is not going to calm this situation.  Rahu in Purnavasu into Sept.  will continue to support compassion but malefic aspects will hamper it from Saturn and Mars at times much this year but particularly from March-July when the issue will be even more charged.

My roots are in Poland and my Dad survived a Nazi work camp to eventually be brought to the US by my Aunt Bronia in 1947.  In the early 40’s Joseph Kennedy advised FDR to turn away Jews wanting to escape Europe and many boats came and were turned away.  In 1962, the Catholic missions airlifted over 12,000 Cuban children out of Fidel’s Communist country but created great trauma for years as many were separated from their families.   There are so many heart-felt stories that show the importance of helping people in distress and there are also the challenges.

Balancing humanity and safety are not easy feat and political complexities are beyond many to solve.  The US bombed destroyed Iraq and overthrew Libya creating much of the recent refugee crisis in Europe and they have tried to help in Syria but to no avail.  Europe’s situation is much more dire and the backlash between the EU and the need for sovereignty is pushing Hungary and Poland to fight back against liberal EU problems.  The unreported reality of the Arab migration in Europe is the destruction of European culture and it is being strongly felt in countries like Belgium, the UK and Sweden where kindness is often sub-planted by Arab groups bombing and raping and EU laws are becoming Orwellian in support of Arab populations at the cost of democratic freedoms.

The battle over the US wall and protecting US borders is turning into a political showdown between compassion and safety.  We cannot be naïve about letting criminals into our house and at the same time we cannot ignore the plight of those who have lost their homes.   I personally have been compassionate in letting the homeless stay in my home when I was in Arizona only to face huge and complex issues with their karma around drugs, cleanliness and basis needs.  In the end, refugees need to be vetted but taken care of while they wait.  My Israeli family reminds me that the wall erected in West Jerusalem has protected them from terrorists and PLO members more easily wanting to cause problems.

Its hard to get the truth from the media but there is a problem with illegal aliens and criminals.  The Center for Immigration Studies looked at federal crime statistics. It found that non-citizens accounted for more than 20% of federal convictions, even though they make up just 8.4% of the population.

“It is almost certain that a majority of non-citizens convicted of federal crimes are illegal immigrants,” said Steven Camarota of the CIS.

Even if Cato is right that the crime rate among Hispanic illegals is a bit lower than for natives, that’s cold comfort to victims of these crimes, which would not have happened had the border been more secure. They would likely agree with Trump about their being a crisis at the border.   (See full article at : https://www.investors.com/politics/editorials/trump-crisis-at-the-border/?fbclid=IwAR3hXIbcalUNiAtlouM8eWnl1JOiQldv5GrLjc4b7ACPk3dsM6FPo4toRrg )

I always want to be neutral about politics but the Rahu shadow on immigration and distortion is weaving all kinds of crazy situations. The EU crisis around immigration is very serious for their future and safety and cultural integrity and yet the humanitarian need is also great.  The situation in the US is so much more complex in that the costs of taking care of immigrants is budget-bending for many countries.

Investor’s Daily reports that the US is handling a larger portion of the crisis already in comparison to European countries:

Pelosi and company also don’t bother to mention the fact that there are already between 12 million and 22 million illegals — depending on which study you use — in the country today.  Let’s put that number in perspective. At the high end, it means that the illegal population in the U.S. is larger than the entire population of countries like Syria, Chile, the Netherlands and Ecuador. Even if the number is just 12 million, that’s still more than the entire population of Sweden, Switzerland, Hong Kong, Denmark, Finland, Norway, Ireland and New Zealand.  It is, in short, a massive number.  Here’s more perspective. The U.S. is virtually alone in the world in having such a large share of its population in the country illegally.  An analysis by the nonpartisan ProCon.org found that in 2010 almost 4% of the U.S. population was in the country illegally. The average for 13 other countries it analyzed was just 1.3%. In France, for example, illegals make up just 0.9% of its population. It’s 0.3% in Germany, 0.8% in Spain, and 0.5% in the Netherlands. Isn’t having millions in the country illegally, with thousands joining them every day, not a crisis at the border?

With Rahu now in Purnavasu until Sept. 27th in the True Node system, we have a better chance for compassion as Purnavasu is the world mother and yet we are going to have to deal with the eclipses in the Gemini/Sagittarius axis, the aspects of Saturn and the conjunction of Rahu with Mars in June so it will not be a picnic.    Rahu in Ardra nakshatra (Gemini 6.40 to 20.00) is a much more difficult time as it tends to be more destructive and bring tears for transformation to occur.  With Saturn into Capricorn in Jan. 2020 and Jupiter into Sagittarius starting Nov. 2019, it seems that more positive transformation around this issue will develop.

Immigration issues have been there for time immemorial and are part of planetary evolution.  Balancing the two sides of the Rahu’s shadow is always daunting.  Given the long Rahu period in the US until 2033, I suspect are more at the beginning of this crisis rather than end. Continue to support the humanitarian side of the issues but see the other side and the need for protection.   There are no easy solutions.    Let hope that our politicians can keep moving toward humane solutions and at the same time be real about budgets, safety and the other side of the coin. No easy solution.

(Please no political trolling: I am neutral on a very complex solution–political fighting does nothing when people need help and at the same time we have to be real about safety issues) 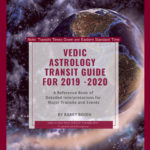 TAKING PRE-ORDERS ON OUR ALMANAC NOW. BUY EARLY AND SAVE.

A guide for anyone interested in understanding planetary transits that often blocks us from moving forward in our life.

Barry’s unique spiritual and psychological approach to astrology will help you understand how planet placement impacts your emotions and psychology that bind us to self-blame, doubt and fear, and anger.

This guide for 2019-2020 will help you plan the next few years by your rising sign so you know the best months of the year for progress and how the larger transits for Jupiter, Saturn, Rahu, Ketu and the eclipses will impact your life.

Articles Included in This Book:

As a bonus, Barry has included global and economic, political forecasts for those interested in Mundane astrology.

This is definitely a reference book to have on your shelf for practicing astrologers or just people who like to dabble!
It will also be useful for both Vedic and Western astrologers!

Click here to order and Save $5.00 before release date.

What fellow astrologers are saying about last year’s edition: