EYE ON ASTROLOGY: SUN IN PISCES

Sun moved into Pisces on March 14th and Mercury retrograded out of there so changing places is the theme of the day.   Pisces is the natural 12th sign of the zodiac connected to Moksha and enlightenment and its shakti is that it brings the blessings of Saraswati, the goddess of wisdom that brings Knowledge of the Self.   Planets placed here anywhere in any of the charts show great talents and knowledge. But being the natural 12th house, it requires dedication to service and sacrifice to bring out its power.  Pisces rising has difficult with the Sun, the natural 6th house from Pisces so father issues and issues with authority and bosses become a natural problem.

The Sun is happy in Pisces but it is 8 houses from its home in Leo and people born with that rising sign are still going through deep spiritual transformations.   Sun is still in Purvabhadra Nakshatra until March 18th and channel an optimistic and overconfident Jupiter that is starting to get afflicted by a sneaky 8th house aspect of Mars into March 21st.  Sun moves into Uttarbhadapad (Pisces 3.20-16.40) on March 18th into March 31st where it channel’s Saturn’s energy and Saturn is starting to feel the weird energy of Ketu.   Still that constellation promotes spiritual development and so good time for a meditation retreat.

This is the final part of the Sun’s journey as it prepares to move into its sign of exaltation in Aries, April 13th-May 14 and shine in its Divine glory. President Trump is ruled by Leo and this 8th house transit for him continues to be difficult as deep karmic issues surface but should do better after April 13th.

If you need a reading, sign up for an interview under the consultations tap   at www.appliedvedicastrology.    Time to show some hidden light and unlock these karmas that often run our lives for years.

Closing registration on our 16 week class on Rahu on Ketu which is live on Saturdays, March 30-June 29th.  Email us at barry@appliedvedicastrology if you need a payment plan or special discount coupon.

RAHU AND KETU: UNDERSTANDING AND HEALING THE KARMIC AXIS

The famous Pisces fish represent the fish swimming its path in the sea is connected to life-path and the path to liberation but it is more as it is connecting to the universal mind and reminds us of the true meaning of Jai Guru Dev, Victory to the Big Mind.  Only by letting go of our small ego and surrendering to the Divine will, do we stand a chance of transcending the changing world.

The deity of the constellation is Pushan, connected to the Sun, who lights the paths to the Divine and is connected to travel whether mental journeys or spiritual pilgrimages.  Both are the same.  As Saul Bellow’s character in Henderson the Rain King proclaims, “all travel is mental travel.”  Hence our outer quests are part of our inner quest to return to the Divine.

Revati is ruled by the planet Mercury and contains all the Divine wisdom that exists in the Universe as it allows one to understand the possibilities of the entire creation.  Hence as we get the spring transits through Revati , we should get a deep awakening of spiritual knowledge and a great time for spiritual journeys with a peak of this energy probably felt the next two Sundays on April 2nd and 9th with Jupiter trining the Sun with a wide angle and exact  into around April 13th as it enters Aries.

Special thanks to Prash Trivedi for his insights into the wonderful constellation and to all my Gurus that continue to light the path.  Blessing to you all going into the weekend. 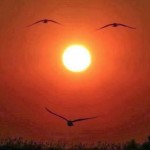