Whereas western culture delights in January New Year predictions, the Vedic New Year calendar is often run for the new Moon in March after the spring solstice for the capital city of a country. This year the Vedic New Year does not  begin until March 27th and on that day astrologers cast a chart for the capitial city of their country  and predict the New Year accordingly. In the Vedic calendar there is a diety or god that governs each year and they rotate each year for 60 years and they are connected to the Jupiter and Saturn returns which means the last time that Jupiter was in Virgo and Saturn in Sagittarius. Hence we are going to have influence like we had in 1957-7 and 1897-8.

This  year is the Year of Hemalambin. March 27, 2017, 22:58, Washington, DC or run it for your capital at the new moon after the spring solstice. Here is what the vedic texts say about the year:

HEMLAMBA: If the birth happens during that year the of ‘Hemlamba’ (1957-8 and 1897-8), which happens every 60 years, then the native is endowed with a horse, means of conveyance which is costly, of high speed and four wheeled, gold, clothes, wealth and grains and gems. He has the happiness of having a good wife and sons and he has the tendency of collecting all kinds of material things (for comfort and convenience).

Notes: The Hindi word ‘Hema’ is the synonym of ‘Suwarana’ or gold. Such natives are generally seekers of comfort and happiness. They have materialistic point of view and are very successful in worldly matters. They proceed towards prosperity right from their young age. They have the tendency to bring to their homes even the costliest of things. They regard their own comfort and happiness as of prime importance. Such a person is respected in society only due to his prosperity or richness. Otherwise he is very miserly. Such a person is of little use to anyone when his help is needed or when an occasion to help others arrives.

According to the writer of ‘Jataka Parijata’ such a native is pure and clean, peaceful, extremely adroit or skilled, honored everywhere due to his virtues, is beneficent, one who remains engaged or busy in religious debates or discussions and is the husband of an ugly-faced wife. The native is of wicked soul, and has a desire to do agricultural and such other works.  But according to the author of ‘Jataka Parijata’ such a native is devoid of virtues, wealth and good conduct. Here is the chart for March 27th: 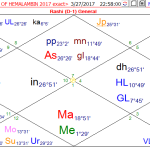 For those wanting to say good-bye to the  Year of  Durmukah, it is not over for another 3 months and as everyone has felt, the rule of this year is a bit more challenging.  We wrote about this on our blog last winter and said the following:

It began on April 7. Each year is named after a Vedic deity and 2016 is the Year of Dhurmuka. The last time Dhurmuka was the ruling deity was the spring of 1956 to winter 1957. The Vedic texts point out that people born this year are “cruel, of a cheating nature, endowed with reprehensible or blameworthy mentality, avaricious and extremely villainous and wicked.” Such individuals are thought to “argue and disagree with the thoughts and ideas which are accepted by one and all.”
The rule of the year is Venus and the and the ruler of the American New Year is Mars which owns the lagna (ascendant) Aries, so they do not make a great combination and Mars is placed in the 8th house with Saturn suggesting a very intense year of transformation for the United States this year.

Using the sixty-year cycle, we can look at political events around the world from March 1956 to March 1957, and March 1896 to March 1897, to get a flavor of major events of those years and possible trends for the current year. In May 1956, the United Methodist Church decided to grant women the full ordained clergy status and ended racial segregation. In August 1957, West Germany banned the Communist Party of Germany. In October 1956, the UK, France and Israel secretly met and made plans to invade Egypt and then invaded the Sinai Peninsula and pushed Egypt back toward the Suez Canal. The crisis eventually led to the rationing of petrol in the UK. Also the Hungarian Revolution broke out as Hungary attempted to leave the Warsaw Pact and the Red Army invaded Hungary. In the US, Eisenhower defeated Stevenson. Terrorism increased with a major pipe bomb planted by George Metesky exploding in a theatre in Brooklyn. Finally into March 1957, President Sukarno declared martial law in Indonesia.

So we have more work to do on the New Year but we are still not done with Durmukah so be patient until the spring.

If you need help understanding your chart, view our services at https://www.appliedvedicastrology.com/category/services/ or take our new class starting Jan 14th on understanding and timing your personal chart.  We are running a Christmas/post Christmas sale for 99.00 for the 4 classes.   https://www.appliedvedicastrology.com/products-2/timing-your-life/.   Learn some of the secrets and simple techniques for understanding how to time from my 30 years experience. This is not material that you will get from a book as a lot of secret relationships and insights will be revealed.

Note: Peoples charts and transits are very individual and we write general articles that maybe useful to all our readers. In reality, Vedic astrology is very much like  reading very specific strands of DNA.

Wishing you a warm and joyous holiday.  Enjoy the cool brilliance and silence of the winter and move toward more wisdom. 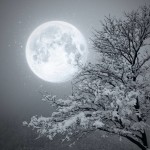