EYE ON THE WORLD:  BIG TROUBLE AT STANDING ROCK

While the mainstream media has been ignoring the stand-off in South Dakota between the native American tribes protecting their water from big oil pipeline builders, social media has kept us in tears as water canons, plastic bullets, aerial sprayings are being callously used in the name of progress.

Aquarius is a sign connected to the water-bearer and  Leo is  very connected to the power elite and the constellation of Regulus.  With the nodes transiting through this area, and the Kala Sarpa Yoga stirring up deep karmic and ancestral karma involving our treatment of native Americans, we are being pressed into making new choices or going back to our old patterns of manifest destiny at all costs.  The constellation of Magha in Leo where Rahu, the north node enters on Dec. 3rd in the sidereal system until next September is churning up issues over ancestral lands. 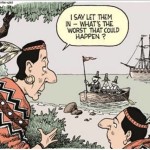 The nodes create a polarization between human rights and societal needs and the power of the ruling elite.  Donald Trump, the US new President has is ascendent in Leo at the star of Regulus in the constellation of Magha and has oil interests owning pipelines.  Will he be able to see the other side of this conflict and provide leadership?.  The UN is entering the picture now so lets hope that more humanitarian needs get taken care of.  As is the case with this North Node (Rahu)/South Node (Ketu) polarization between Leo and Aquarius, one has to balance the right use of power and also uplift humanity.

As Mars goes into Sidereal Aquarius on Dec. 10-Jan. 19th and connects with the South Node, Ketu, on Dec. 25th but intensely within 3 degrees on Dec 23-30th, violence is going to errupt here in a bigger way unless a solution is coming.  The South Dakota police department is more likely to get more caught up in brutal Martian tactics later in the month as Mars gets more afflicted. Lets hope that mainstream media stops supporting the oligarchy on this one and that the Neptunian shadows lift.  The arrival of 2000 Veterans to defend the Native American peoples is coming at a time when Mars is at is highest energy of service in Capricorn to defend and protect. Lets hope it does not devolve later in the month when Mars gets more afflicted.  Sun conjunct Saturn into Dec. 10th is going to heighten conflict with government and a peaceful solution seems like will be illusive.   For more of our posts, see Financial Astrology by Barry Rosen on Facebook and visit our astro blog at www.appliedvedicastrology.com.

See my additional articles on the Nodes: The current karmic axis of the nodes between Aquarius and Leo and the constellations of Magha and Shatabhishak are fueling this intensity.  (see my previous articles these constellations if you are not familiar with them.) https://www.appliedvedicastrology.com/rahu-ketu-dance-rahu-magha-leo-0-13-20-dec-3-sept-10th/ and my article on the Kala Sarpa Yoga which goes into Christmas which has also been fueling this intense karmic axis.  https://www.appliedvedicastrology.com/kala-sarpa-yoga-transit-frustration-snake-time/.

Special thanks to my friend Gary O’Toole for initial insights into spurring thoughts about this material. See his website at:  http://www.timelineastrology.com/forecasts.